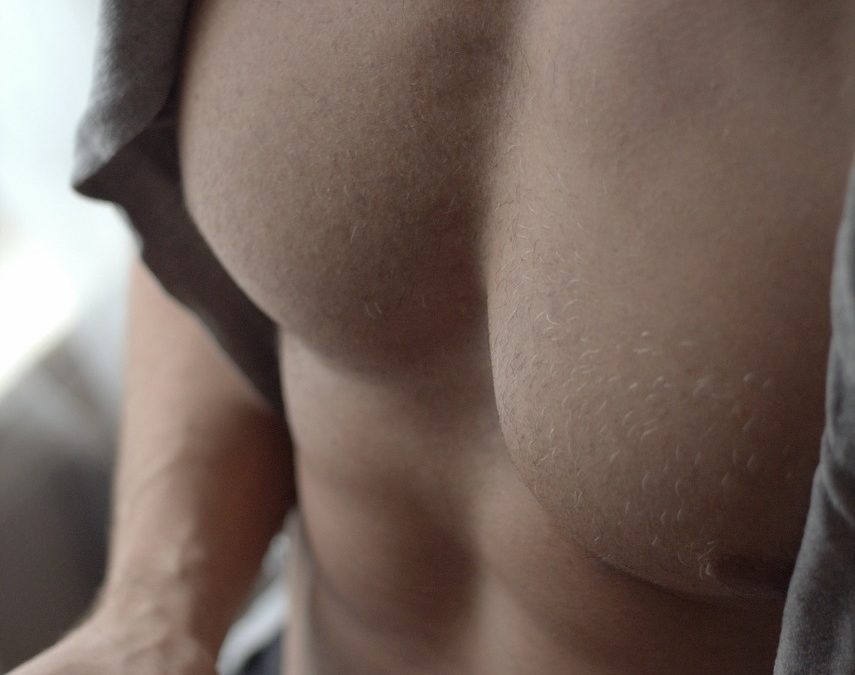 Men are not as generally vain as women but the presence of man boobs, or gynecomastia in medical language, is a reason to feel self-conscious.  In a society that has already accepted the “dad bod” as normal, man boobs still elicit a double take from many people.

Gynecomastia is the condition of men having enlarged breasts. It could happen to men of all ages. Gynecomastia is an endocrine system disorder characterized by a non-cancerous swelling in the male breast tissue. Up to 70% of adolescent boys have some form of breast enlargement during the period of puberty. Newborn males, due to the influence of maternal hormones, and adolescent males, due to the influence of hormonal changes, often times experience temporary gynecomastia.

Benign pubertal changes in adolescent males are the leading cause of gynecomastia. Most of the pubertal gynecomastia cases resolve without treatment within two years of onset. Gynecomastia is also known to occur in association with some disease states. It is common among individuals with Klinefelter syndrome or certain types of cancers, individuals with endocrine system disorder or metabolic dysfunction, individuals using certain medications, or in older males with natural declining testosterone production.

Gynecomastia is generally not a serious problem, although it is quite tough for boys and men to cope with this condition. It sometimes is characterized by pain in the breast area and may also feel embarrassing.

The presence of man boobs not only affects a man’s appearance and self esteem. They also result to some form of physical discomfort because they might be tender. That makes men suffering from this condition resort to anything possible just to get rid of man boobs. But because it is a bit uncomfortable for people to be discussing the subject of gynecomastia or man boobs, there is a lot of misinformation about it.  Myths abound on what causes the condition and the ways to get rid of man boobs.

Myths and Facts About Gynecomastia

The following are some of the myths and facts about gynecomastia or man boobs:

It is a popular belief that gynecomastia or man boobs is purely genetic. If it runs in the family, there is a big chance that you will have it also. If your father has it, you cannot find any answer on how to get rid of man boobs because you cannot change your genetic makeup.

While genes play an important factor in the development of man boobs, there are other reasons behind it. Factors that trigger the formation of gynecomastia include age, obesity, drug use, and some health problems such as liver disease, kidney failure, and low levels of testosterone. Any condition that causes a man’s estrogen level to go up will increase his breast size, giving way to gynecomastia or man boobs.

Many people believe that gynecomastia or man boobs are purely made up of fat because they see that most men with the condition are overweight or obese. Therefore, getting rid of man boobs will be possible only if the person will lose excess weight because they are excess fat that ended up stored in the wrong places. Another reason behind this myth is because the breasts of a woman are mostly fat, hence the same case applies with man boobs.

The fact is that both male and female breasts are a combination of fats and breast gland tissues.  There is no such thing as pseudogynecomastia, or excess fat in the man’s chest resulting from obesity.  In gynecomastia, there is an overabundance of fat and gland tissues. That is the reason that the most recommended way of getting rid of man boobs is through surgical intervention.

There were media reports in the past that claimed that drinking beer with hops, bitter aromatic oil added during the brewing process to prevent bacterial growth and add the characteristic bitterness in beer, could result to the growth of men’s breast. It is based on alleged studies that the hops in beer cause the estrogen levels to be elevated, leading to breast enlargement to the male drinkers. Refraining from drinking beer with hops will be the simple answer on how to get rid of man boobs.

This myth has long been discredited as it became clear to researchers and medical professionals that drinking beer with hops does not contribute to men having gynecomastia. The closest thing that beer has in relation with the condition is that drinking too much beer can result to excess weight, which is just a small factor in the formation of man boobs.

Myth # 4:  Gynecomastia is one of the early signs of breast cancer

The fact is that steroid use is one of the main triggers of developing man boobs. Whenever a person who is using steroid stops, he will experience a fluctuation in his testosterone levels, accompanied by a temporary elevation of his estrogen levels, which will result to the development of his breasts. Steroids will make gynecomastia worse instead of making them disappear. The man boobs will become bigger when you use steroid to get rid of them.

Messing with your body’s hormones is never recommended, as this can cause imbalances in your body. If you want to know how to get rid of man boobs fast, your best option will be to consult your doctor who will properly address your condition, instead of you self-medicating using steroid.

Myth # 6:  Cream, pills, and exercise can get rid of gynecomastia

The fact is that the creams and pills marketed for instant or miracle solutions to gynecomastia do not work. The marketers are simply spreading misinformation to convince the gullible to buy their products. Exercising to lose weight can help reduce fat in the chest, also in other areas of the body. But gynecomastia does not involve only the accumulation of fat as it is mainly caused by the overdevelopment of solid breast gland tissues that cannot be removed by any amount of exercise. Exercise may develop the pectoral muscle, which will make the man boobs even more prominent.

Myth # 7:  There is no solution to gynecomastia

It is the common belief that since exercise, pills, creams, and steroids can get rid of man boobs, there is no solution to it. As such, men with gynecomastia have resigned themselves to the idea that they will be living the rest of their lives with man boobs. This often times result to low self-esteem and in some cases entertaining suicidal thoughts. In most cases, gynecomastia leads to depression, anxiety, and other forms of negative behavior.

The truth is that there are solutions to gynecomastia. Several options are available for men who are looking for ways on how to lose man boobs. Men can get rid of gynecomastia through medications and surgery, nutrition, and the use of compression shirts.

The surest way of how to lose man boobs in week, or faster, is through surgical procedures. Doctors recommend any of the two surgical options to remove gynecomastia:

Going on diet to lose weight is a wrong approach resorted to by people, especially those who are looking for ways of how to lose man boobs in week.  Going on diet will reduce the production of testosterone. You can go on diet if you want to lose fat in your belly, not when you want to lose fat in your breast. Eating more nutritious food will help boost your body’s production of testosterone, which could contribute to the elimination of man boobs.

Open Mind for Men with Gynecomastia

Men with gynecomastia should not despair with their condition. They should have an open mind about their condition and that they should not believe everything that they hear about it.  Many people make unfounded claims or advance unproven opinions regarding the causes of the conditions and the mode of treatments.

In this age of post-truth, people should be careful in forming opinions and consequently taking actions based solely on common or prevailing ideas. This is significantly important when it concerns one’s health. Making decisions when it comes to treatment options for gynecomastia is better made with guidance of medical professionals. Remember that it is your health and your life so you better take good care of yourself. See your doctor.

More from my site